Material Handling carries a large inventory of hand trucks. Our products make moving large loads a breeze to maximize efficiency and decrease manual labor. Anything from folding and convertible 2 wheelers to aluminum and heavy-duty hand trucks, materialhandling.com have you covered. Material Handling also has trundles that make moving large items or appliances upstairs a breeze. Thanks to our many FOB locations we are ready to ship all across the USA.

What are some tricks for loading and unloading with a hand truck? 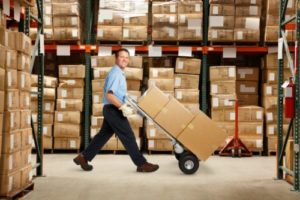 Load heavy things low, so when you are pushing it, you are not sagging in the middle. Load light things high to avoid sliding if the ground is slanted. Pushing a hand truck sideways may reduce tiredness in your upper body muscles or shoulder stress. Carry or walk facing sideways if possible. Keep feet close together when pushing backhand but closer when pushing forehand. Rest often and drink lots of water for both loading and unloading - especially uphill! Unpack slow- don't just throw stuff down on whatever surface was easiest to reach!

When is it appropriate to use a hand truck? 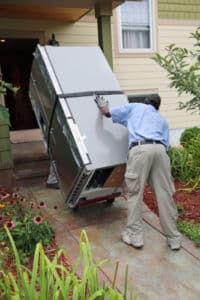 such as an up or down staircase. They also come in handy when you're moving large and/or bulky items such as mattresses, couches, appliances, and boxes that don't fit through doorways.

What is the difference between a hand truck and a dolly? 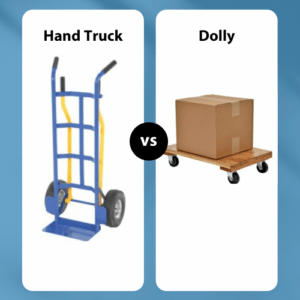 Hand trucks are typically found on construction sites as a means of transporting heavy loads. They also feature smooth, flat surfaces to easily roll over obstacles such as gravel driveways and thresholds.
Dollies can be used for moving large items from one floor of a building to another, but the nature of those surfaces is too varied for a dolly to work well across them all.

Why is it called a hand truck? 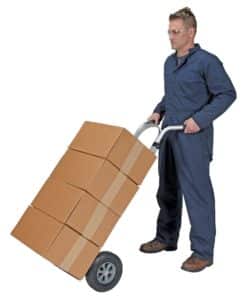 The word hand truck comes from the 19th-century tradition of carrying loads on a human's hands, with a sack truck being a type of hand truck. The word implies that they can be pushed by one person, with the verb 'push' coming from the old French "pousser."

An early derivation of this meaning was "to load one's hands" as opposed to using both arms to lift things. In time, this term became generalized as "hand carriage" and shortened simply to hand-cart or hand-truck. In some countries, it is called a dolly or trolley instead of a truck.